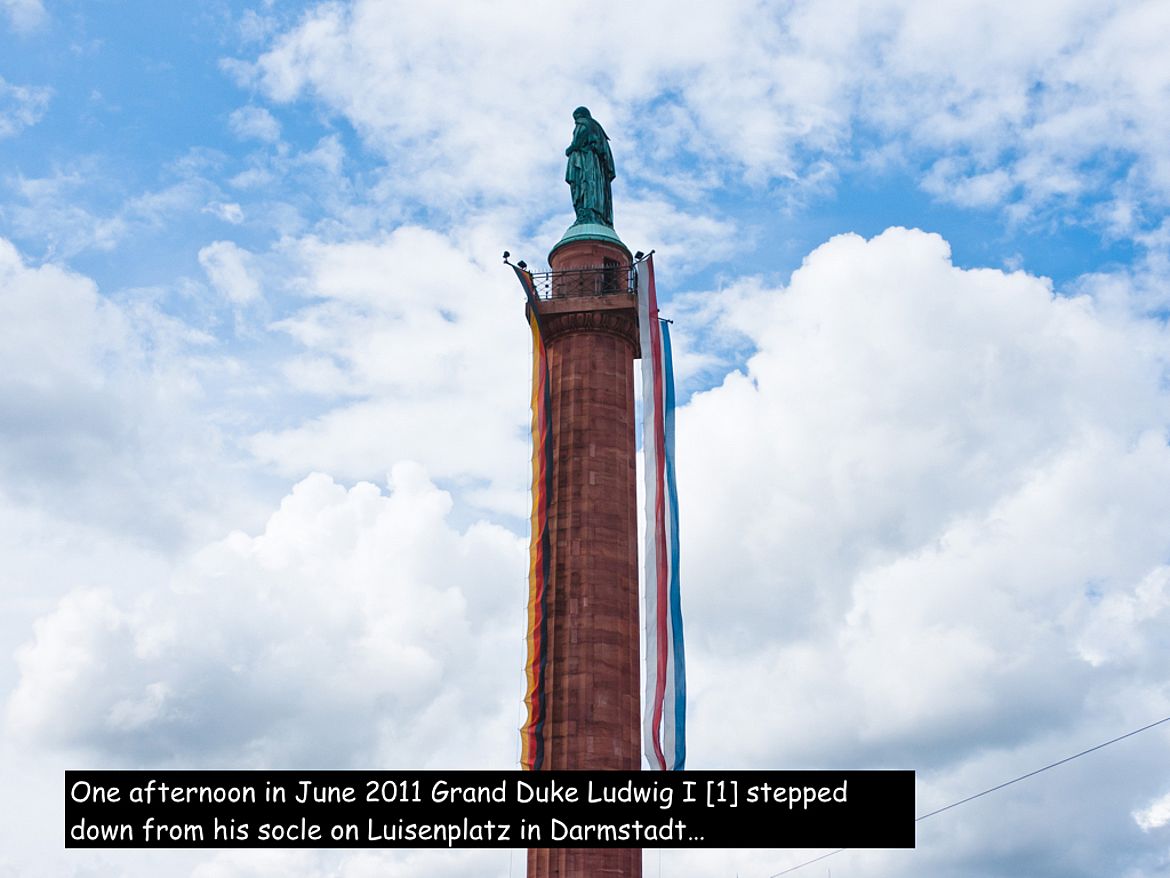 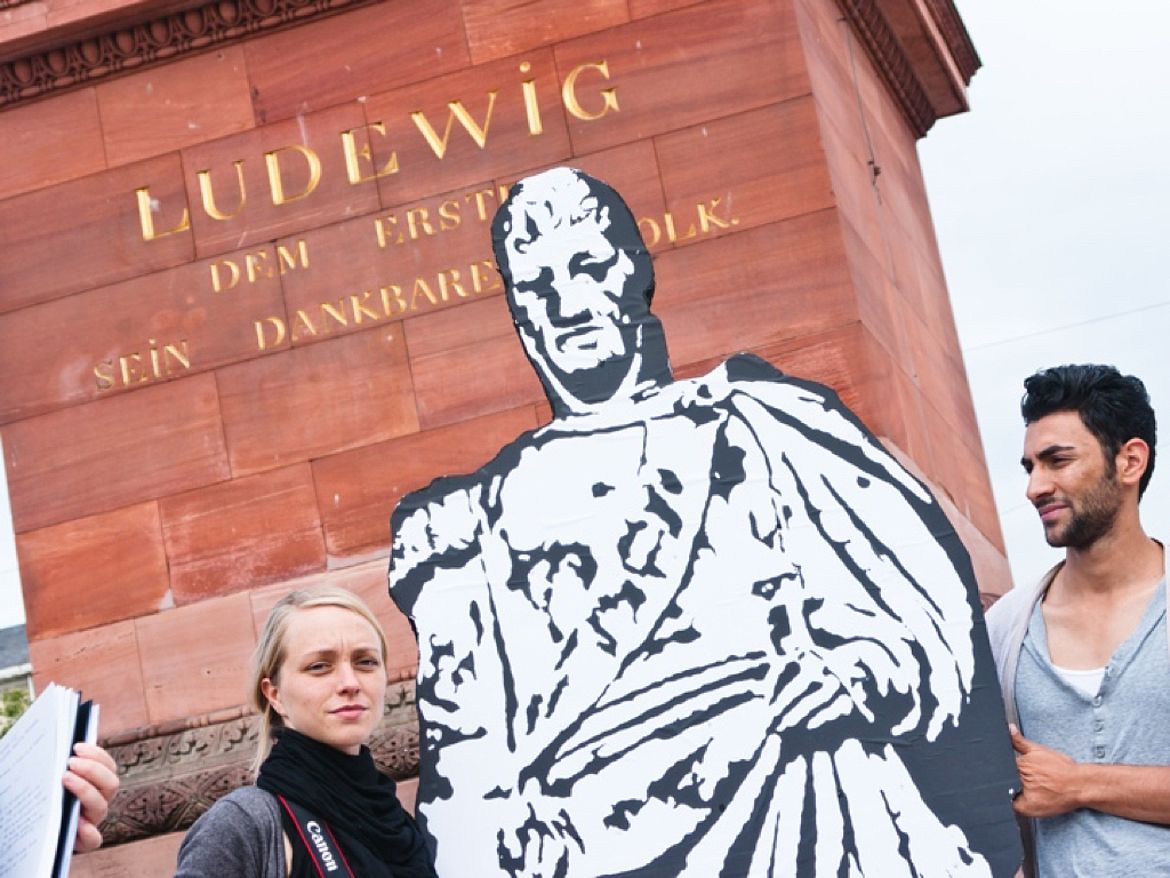 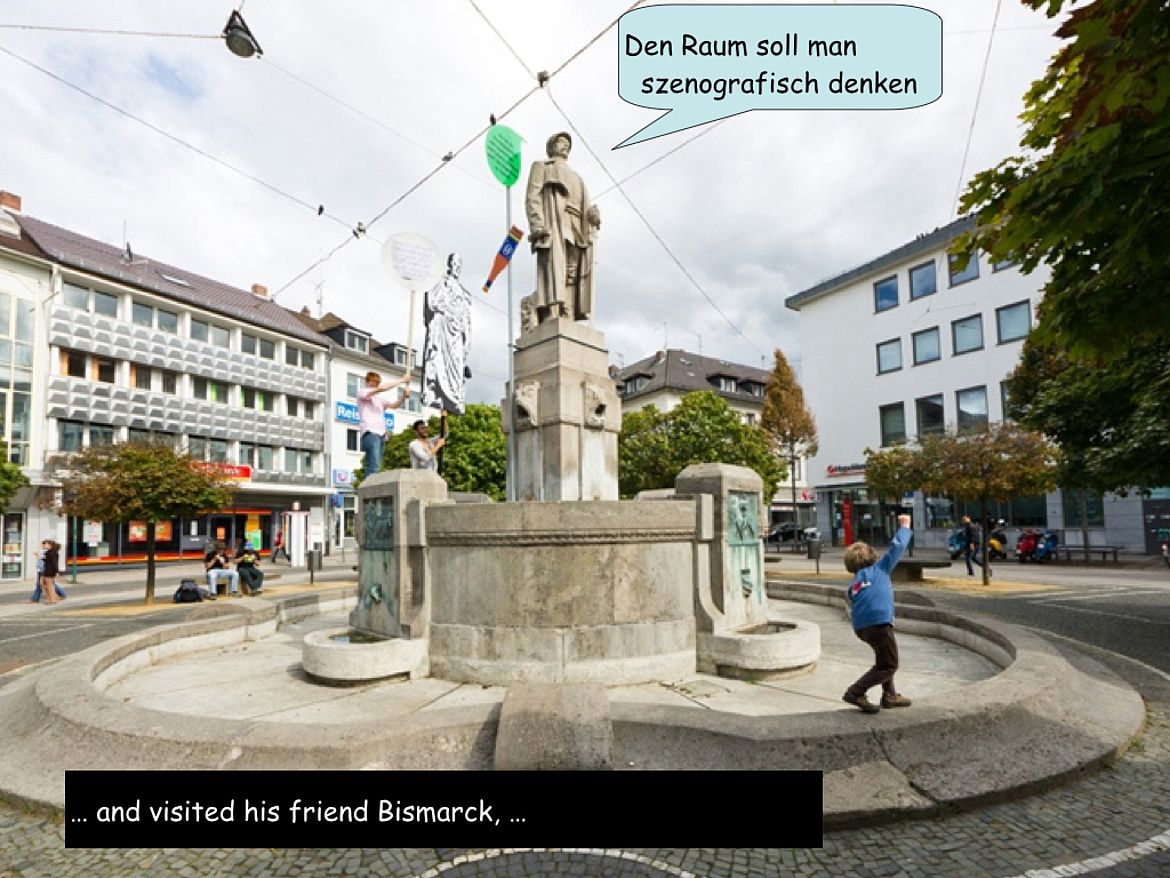 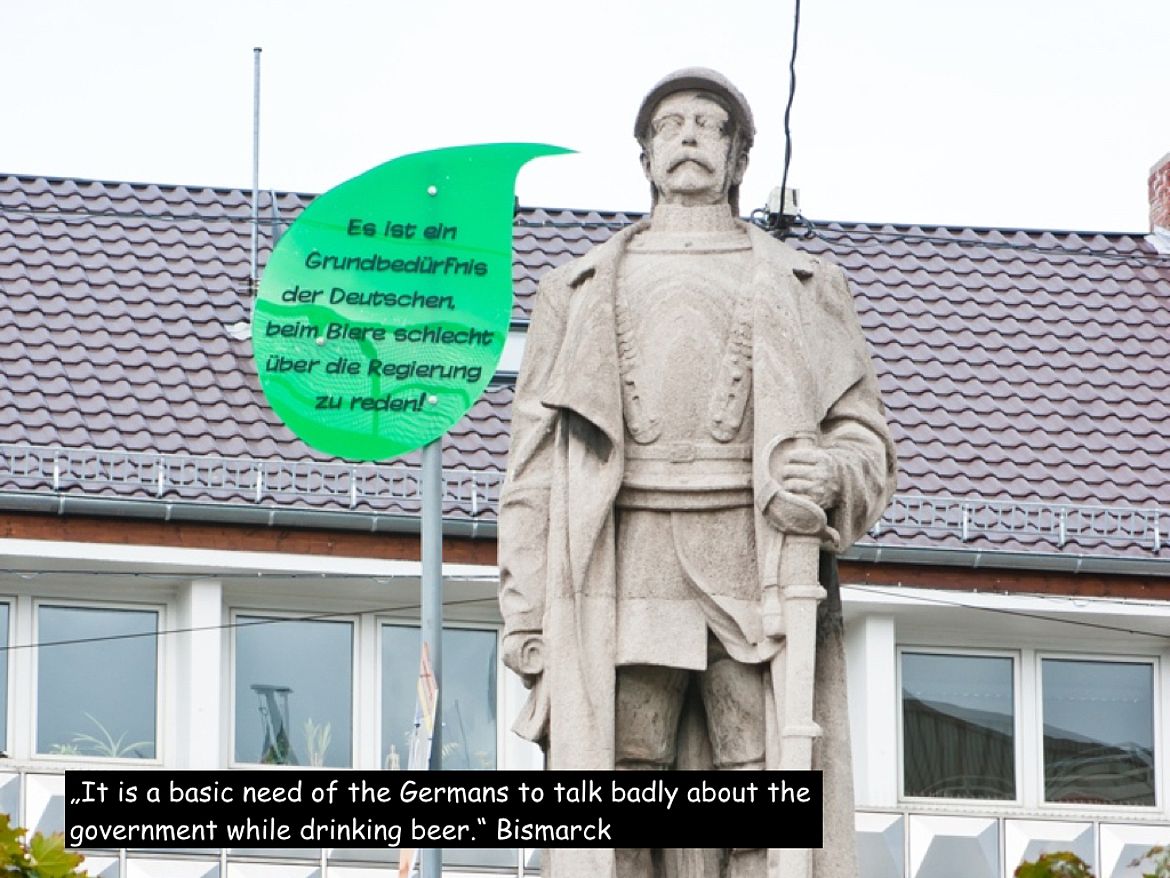 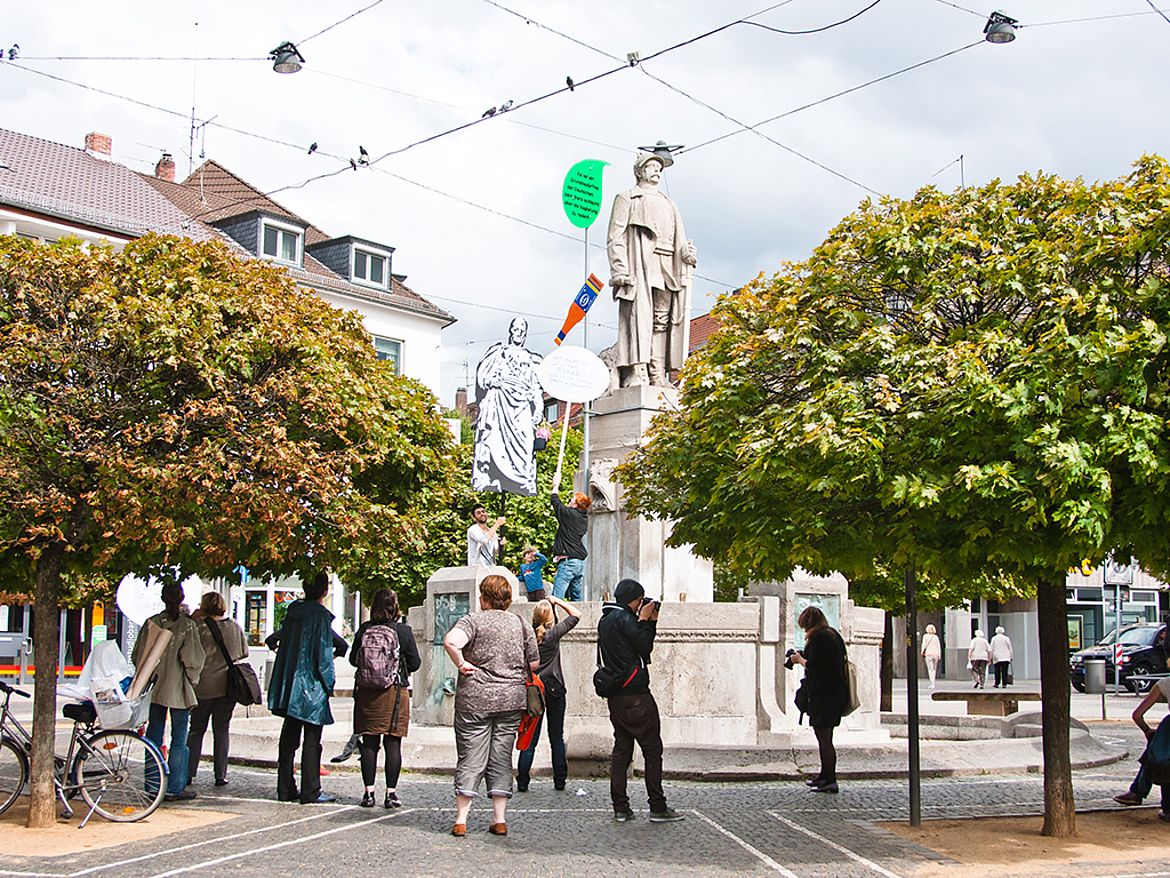 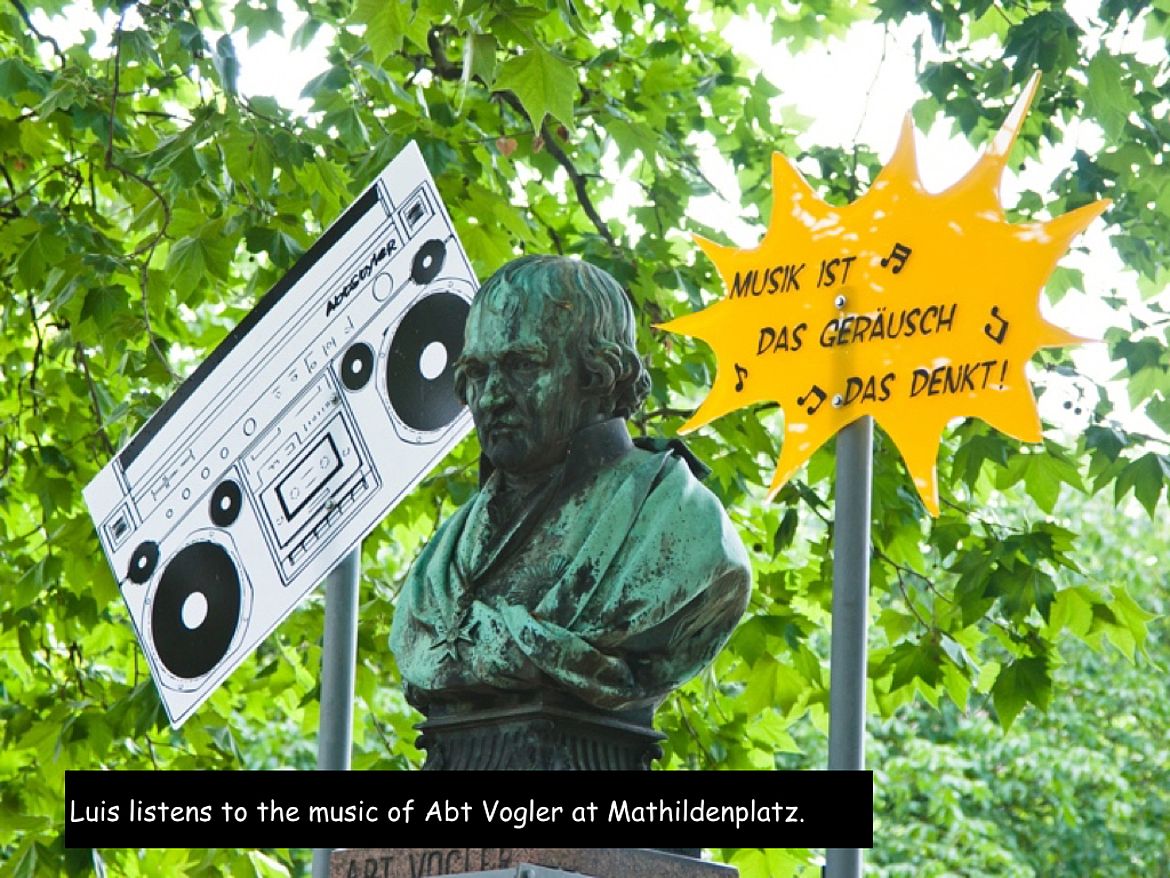 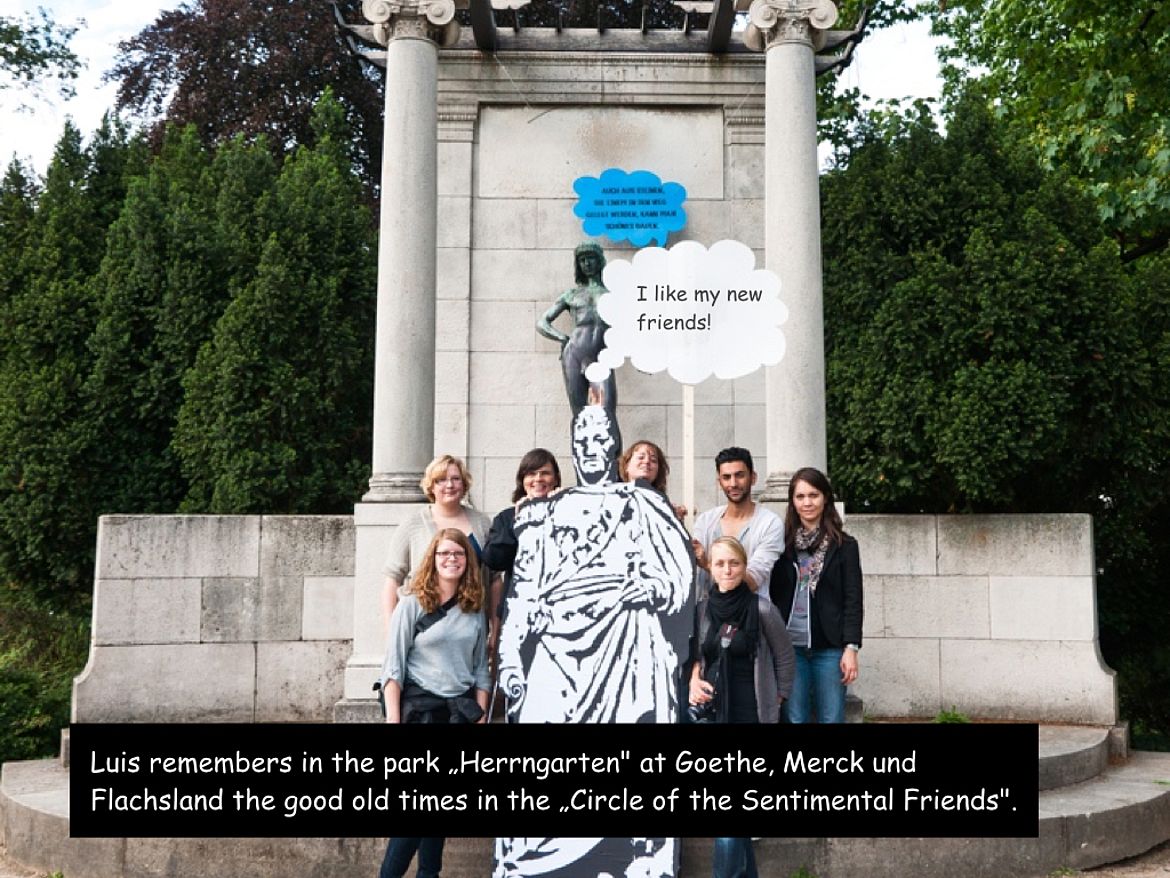 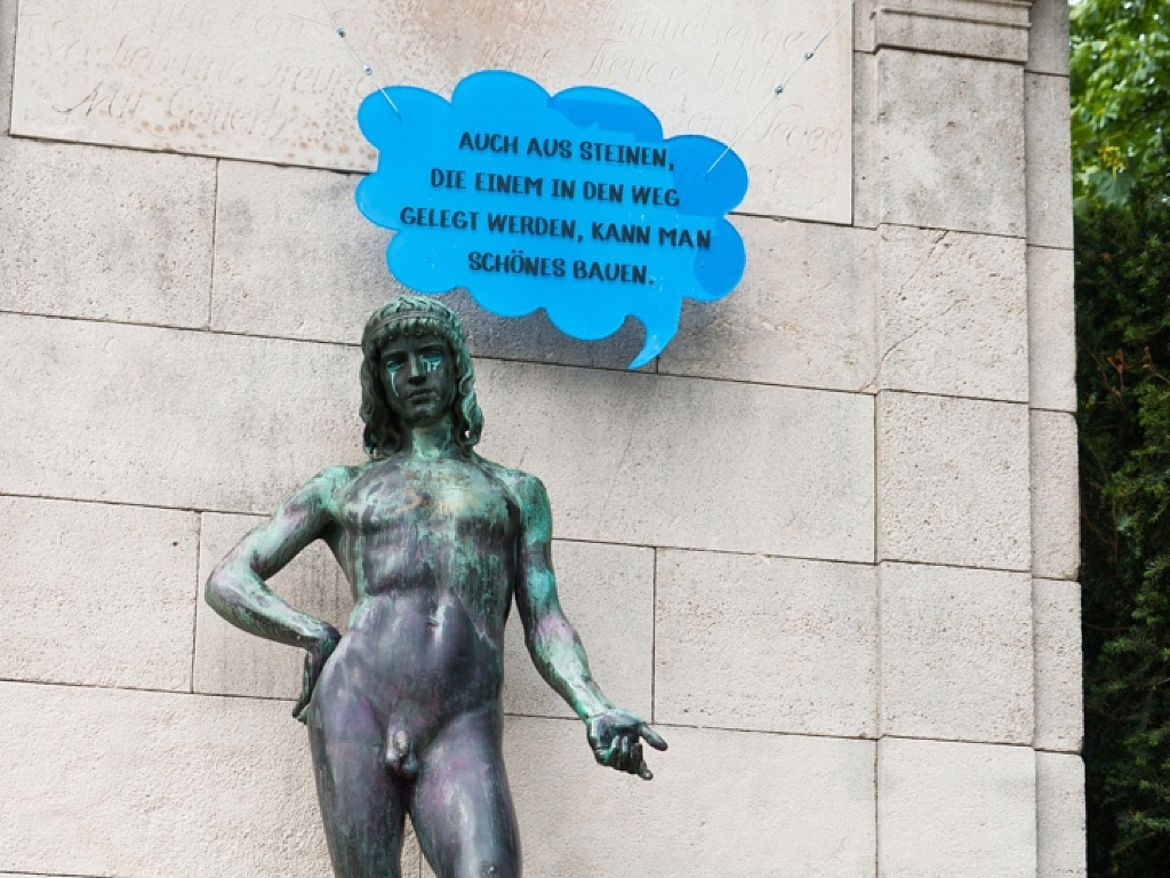 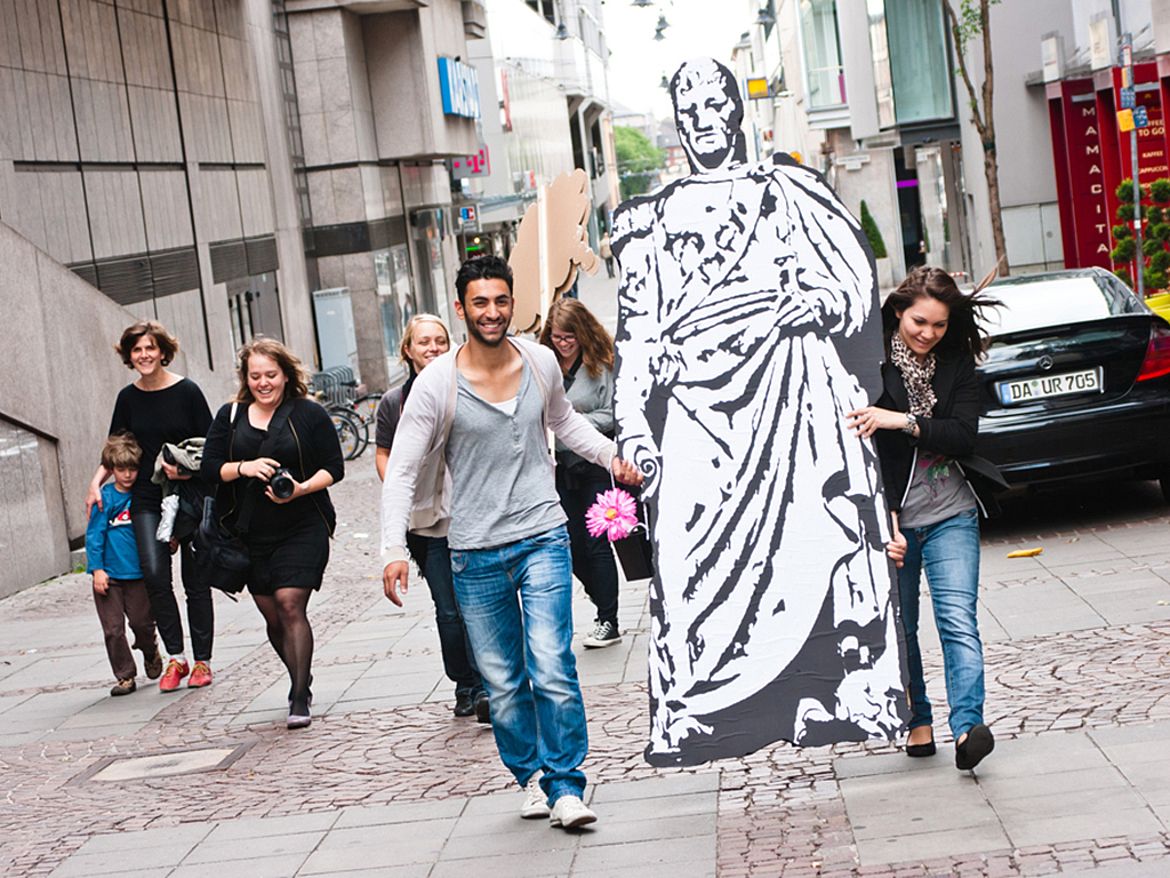 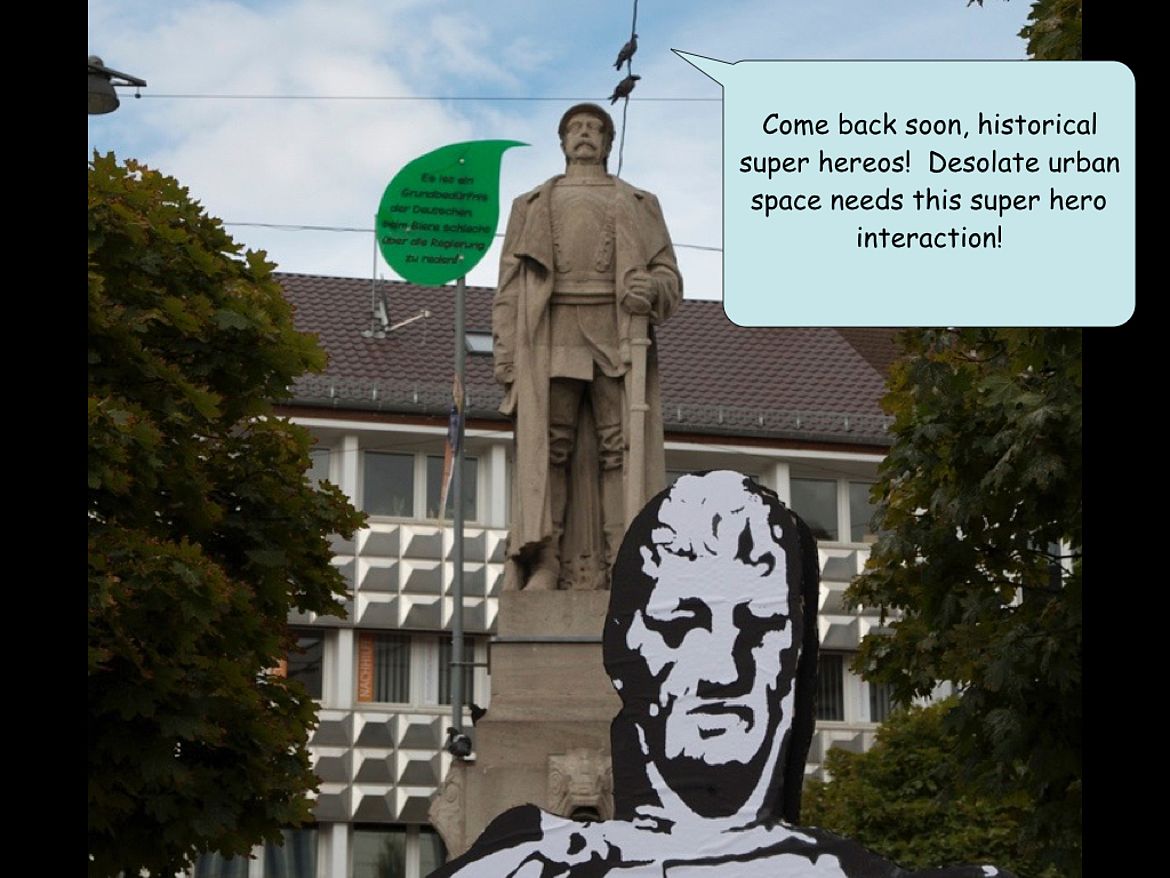 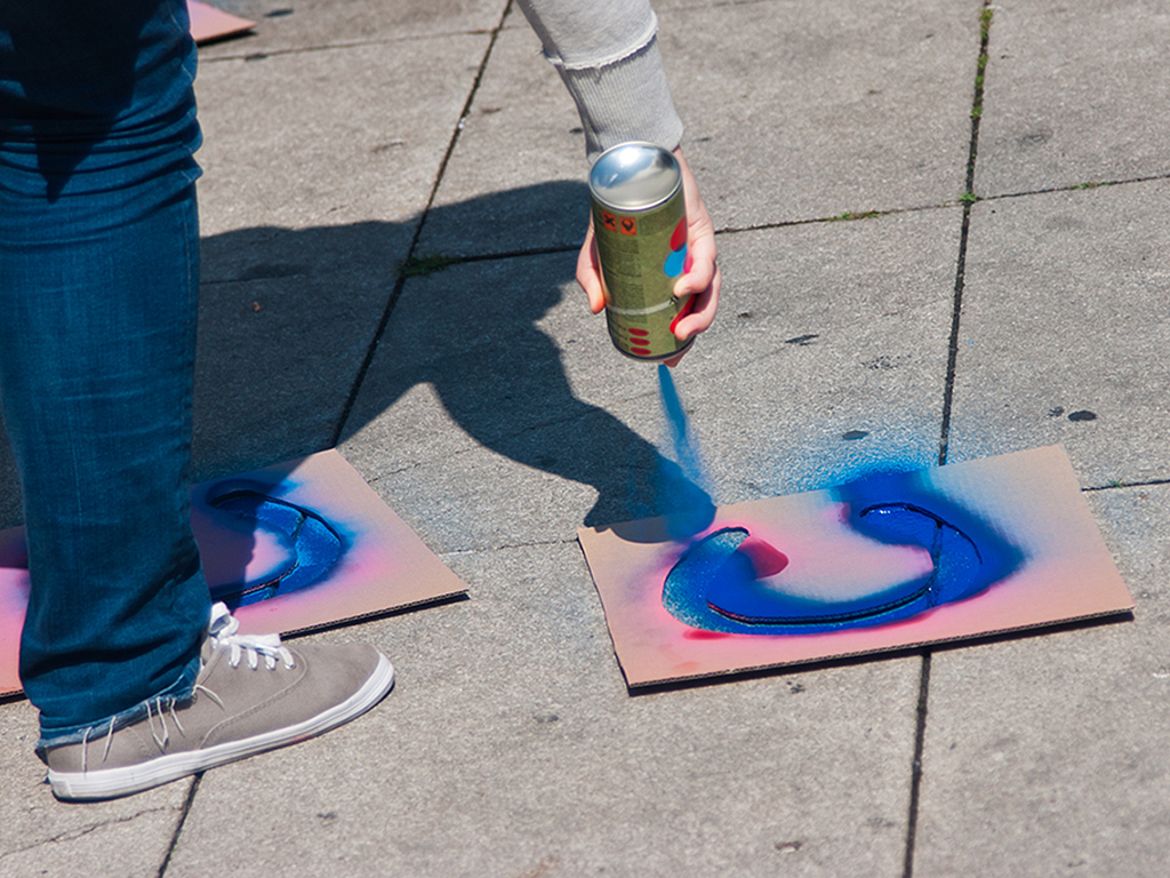 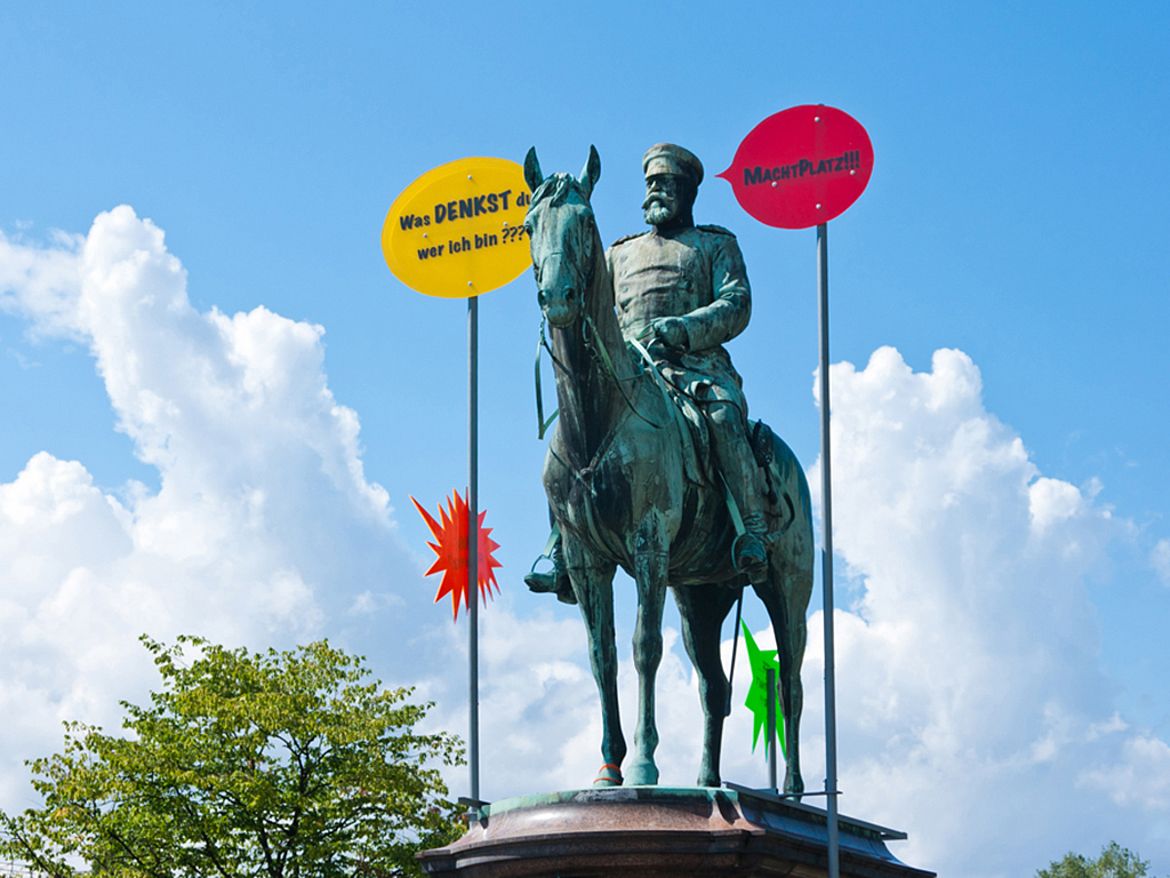 Meet Luis and his amazing Friends

One afternoon in June 2011 Grand Duke Ludwig I (1) stepped down from his socle on Luisenplatz in Darmstadt and visited his friends Bismarck (2), Abt Vogler (3), Goethe (4) and his relative Ludwig IV. (7).
They talked about politics and the missing Darmstadtia on Ludwigsplatz, listened to the music of Abt Vogler on Mathildenplatz and in Herrngarten together with Goethe (4), Merck (5) and Flachsland (6) they thought of the good old times in the "circle of the sentimental friends".
After a parade on horseback over the course of Friedensplatz Luis discussed with his amazing friends, students, passers-by and Peanutz Architekten about city planning and the significance of space.
"Urban space should be thought scenographically," said Bismarck, resurrected in the urban live-comic with mobile and permanently installed speech bubbles. Come back soon, historical superheroes, desolate urban space needs such super heroe interactions more frequently!"

1) Ludwig I, Grand Duke of Hesse (1753-1830), gave a constitution, which was prepared by Grolman, to the people of Hesse in 1820. He tolerated reform efforts, opened the court library, promoted the theatrical and musical life and the work of the architect Georg Moller, who gave Darmstadt a classicist face (Moller City). In honor of Ludwig I the Ludwig-Monument (called Langer Lui) was built (1841-1844) on the Luisen-Square, which was named after his wife Luise.

2) Otto von Bismarck (1815-1898) was a lawyer, farmer, and politician. From 1871-1890 he was the first German chancellor of the German Empire, which he impelled to found. With his foreign policy he focussed on the balance of powers / European balance / Bismarck's alliance system. He was responsible for domestic reforms, such as civil marriage and the creation of the social security system.

4) Johann Wolfgang von Goethe (1749-1832) was a lawyer, writer and poet and he persued research in natural sciences. As the author of numerous poems, plays and short stories, including "The Sorrows of Young Werther" and »Faust«, he has a sustainable influence on German literature until today.

5) Johann Heinrich Merck (1741-1791) was a publisher in Darmstadt, editor and a natural scientist. He was the center of "the circle of the sentimental friends". Once a year, the German Academy for Language and Poetry awards the Johann-Heinrich-Merck-Prize for criticism and essay.

6) Maria Carolina Flachsland (1750 -1809) was together with Merck and Goethe, an important person of the Darmstadt »circle of the sentimental friends«, which also temporarily her husband Johann Gottfried Herder belonged to. On the recommendation of Goethe, the couple moved to Weimar in 1776.